You are here: Home / Who We Are / Mark DeLuzio Mark DeLuzio—known as a pioneer of Lean and the principal architect of the Danaher Business System—serves as a trusted advisor to senior leaders in global manufacturing organizations whose financial and operations metrics have flatlined. Leveraging his unmatched and inventive experience, Mark helps them think differently about how to optimize their approach system-wide. For his winning record in transforming companies and facilitating non-zero-sum game deals, Mark is also on the board of Hillenbrand Inc. (NYSE: HI).

While many know Lean in theory, Mark has lived it inside-out in practice. After developing the first Lean Accounting process in the US for Danaher’s Jake Brake Division—setting an industry-standard many companies are still trying to replicate—Mark became the VP of Danaher Business Systems, where he led its global deployment and enlightened Wall Street on its merits. Engaged in their first study mission to Japan to learn from Toyota and its suppliers, he’s still mentored by the masters of the Toyota Production System today. Fundamental in Danaher’s recognition as the leading implementer of Lean, Mark founded Lean Horizons in 2001 to helm a global team that serves clients on five continents in both specific and broad business applications of Lean. Their hallmark project with GE’s Money Division—that generated $216m in its first year by reducing retail credit card processing approvals to one day from 63—was profiled in the Harvard Business Review. In 2007, Mark’s “Excellence in Manufacturing” contributions were recognized when he was inducted as a Life Member of the Shingo Prize Academy.

Whether through speaking, authoring, or service on corporate and non-profit boards, Mark’s passion for educating others is evident. Before relocating to Arizona to be closer to family, he spent eight years on the board of his alma mater’s school of business. Institutions like MIT’s Sloan School of Business, Northwestern’s Kellogg School of Business, and RIT have invited him to talk with their students about his experiences with DBS and Lean in order to deepen their understanding of what does and doesn’t add value. 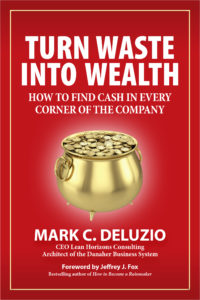