You are here: Home / White Papers / The Danaher Business System vs. the Toyota Production System How Are They Alike? How Are They Different?
Click here to download this white paper as a PDF

Having had the fortunate opportunity to be the principle architect of the Danaher Business System (DBS), I am often asked what it is and how it compares to the Toyota Production System (TPS).  Much has been written about TPS, almost to a fault in my opinion.  Academics have spent countless years studying Toyota but have failed to understand how companies who are classified as “Brownfield” environments implement change and strive for excellence.  Don’t get me wrong, I think that Toyota is one of, if not the best manufacturing companies in the world today.  Danaher, as successful as they have been, does not come close to matching Toyota’s manufacturing capabilities.  However, Danaher took a more comprehensive approach to what we now call Lean.  Originally, Danaher’s process was called the Danaher Production System (DPS) and was shamelessly modeled after TPS.  Early on, we changed the name to the Danaher Business System to reflect that our focus needed to be more business-oriented rather than strictly focused on manufacturing.  (I know some will debate me on the fact that TPS is more than manufacturing…I got that.  However, I will explain below how DBS has evolved and from my understanding, it is much more comprehensive than TPS.)

By having a more comprehensive approach, Danaher has become one of the most profitable industrials in history.  (Note: Toyota’s Gross Profit in 2018 was 17%, while Danaher’s was north of 50%.)  I know that profitability is not the only measure when evaluating a business system, but it would be hard to convince me that it doesn’t deserve to be ranked rather high on the list.

DPS evolved from the work we did at a Danaher division called Jacobs Manufacturing, affectionately known as JAKE BRAKE.  At Jake, the spark was lit in 1987 which ignited the modern Lean movement in the USA.  In the 1980’s Jake Brake was an arrogant company who hid behind their patent as they continued to provide poor customer service and quality.  It was a traditional batch & queue manufacturing company with all of the ills that go along with that.  Under the leadership of Art Byrne and George Koenigsaecker, we were the first to bring the consulting firm Shingijutsu to the USA (1987).  Shingijutsu was comprised of Taiichi Ohno’s first lieutenants from his Autonomous Study Group.  We basically transformed the company by our version of TPS, called the Jacobs Production System (JPS) and returned Jake to profitability in just a couple of years.  When George Sherman became CEO in 1990, he asked me to “do for Danaher what you guys did to Jake Brake.”  I went to work for him directly and began a journey that none of us realized was to be a part of industrial history.  The Danaher Business System was born, and for nine years, I oversaw the evolution of DBS.  Yes, we made many mistakes, which will be the subject of another article.  But it is important to understand that DBS started out as a carbon copy of TPS.  Even though we were nowhere close to matching Toyota in the application of TPS, we continued to perfect our application as well as evolving the scope of DBS, as I will outline below.

Consistent with the Lean philosophy of continuous improvement, DBS was and still is under a continual state of improvement, refinement, and evolution.  Having weathered the Six Sigma storm mentioned above, we became very skeptical of consultants and academics peddling their newest book or silver bullet.  We were open to new ideas, however we found that most new offerings were either a repackaging of existing approaches, were in conflict with the underlying principles of DBS or were viewed by us as something that would take us away from perfecting the basics of DBS.

In summary, the principles and tools of the Toyota Production System form the underlying foundation of the Danaher Business System.  Contrary to the pundits and academics who have made a living promoting the merits of TPS, we knew that we could not blindly copy TPS.  We learned that we did not want to become “like Toyota”, we strived to become “Toyota like.”  As a result, we built a business system that propelled Danaher to be one of the most successful diversified industrials in the world, far exceeding the performance of many iconic companies, including Toyota. 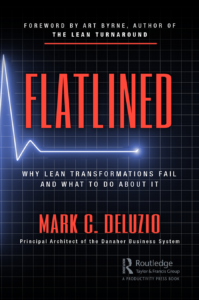